Learn the Possible Cause

Many autism experts claim that several types of foods and diets can effectively treat or help children and adults with autism spectrum disorder (ASD). Some autism researchers also believe there is a strong link between the functioning of the brain and the gut. But with the very large number of foods and recommended diets out there, how can you determine what works best for your child and adult family member(s) with autism?

In this article, we discuss the various theories, as well as the effectiveness of probiotics or the so called “friendly bacteria” and diets in helping ease the symptoms of autism.

What is the Possible Cause?

In their study on autism, researchers led by Dr. Paul Ashwood of the University of California, Davis’ Medical Investigation of Neurodevelopmental Disorders (M.I.N.D.) Institute identified proofs linking autism with changes in the brain, gastrointestinal (GI) distress, immune dysfunction, and severe repetitive behaviors. According to Dr. Ashwood, they found that children with autism have elevated levels of dendritic cells, which are considered as the ‘generals’ of the immune system. He claimed the dendritic cells serve a key role in the body’s immune response to microorganisms, including the disease-causing germs and normal digestive bacteria.

Several scientists, meanwhile, have discovered several rare genetic changes or mutations linked with autism. However, they also found an intricate and different combination of genetic risk and environmental factors affecting early brain development of a child that further increase his/her risk of developmental delays or autism. Among the most discussed theories include environmental risk factors, advanced age of both father and mother at the time of conception, very low birth weight, maternal illness during pregnancy, extreme prematurity of birth, and difficulties during birth, particularly the times in which the baby’s brain is deprived of oxygen. 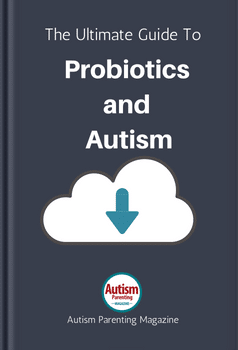 Based on various studies, individuals with autism often have abnormal digestive health conditions like irritable bowel syndrome (IBS). Kids with autism were also found to have an elevated number of the pathogenic bacteria called ‘Clostridia’, as well as the lesser known bacteria called Sutterrella in their guts. Meanwhile, a number of studies showed probiotic microorganisms have positive effects on the digestive health of both adults and children. These healthy microorganisms are contained in the probiotics supplements that can be used to treat ASD, including attention deficit hyperactivity disorder (ADHD), particularly in children.

The US Department of Health’s (DOH) and National Institute of Health (NIH) claimed that gut health and autism are interrelated.  According to the agency, the postnatal development of a child depends largely on the microbiome or the balance of organisms in his/her digestive tract. Every child should have a healthy gut in order to develop proper immune function, regulate inflammation, and support proper and healthy development. To achieve a healthy gut, the thousands of strains of good bacteria should live in balance with the “bad bacteria.”  In the event that the bad bacteria outnumber the good bacteria in the gut, the condition called dysbiosis occurs. A number of autism researchers also consider the presence of an unhealthy gut as a causative factor of ASD, including ADHD.

A 2017 study by researchers at The Ohio State University Wexner Medical Center’s Nisonger Center also showed that children with autism seem to have a low amount of healthy Faecalibacteria bacteria in their stools. This finding is somewhat similar to the results of various studies showing a reduced number of microbes in the gut of autistic kids. However, the study also showed that the appropriate amount of healthy bacteria in individuals with gastro intestinal (GI) disorders and autism can be restored by consuming a mixture of healthy bacteria that is taken as a powder mixed with food. The researchers are scheduled to assess the effectiveness of probiotics in relieving GI symptoms in autistic kids, as well as its efficacy in controlling the children’s anxiety and over-sensitivity to stimuli.

In their various independent studies, experts have discovered an interconnection among gut health, brain activity, and autism. A study by researchers at the Arizona State University’s Biodesign Institute showed a link between the chemicals produced by gut bacteria and the behavior of kids with autism. In their study, the scientists examined the bacterial waste products in the stool samples of the subject children with ASD. They found substantially diverse concentrations of seven of the 50 chemical compounds they identified in the samples. According to study co-author Dae-Wook Kang, majority of gut bacteria are good as they help in food digestion, production of vitamins, and protection against harmful bacteria. However, if not effectively prevented, the harmful bacteria can release toxic metabolites or disturb a balance in metabolites that can affect the gut and the entire body, including the brain.

Meanwhile, researchers at the Texas Children’s Hospital Microbiome Center in Houston have identified a link between the intestinal microbiome or gut bacteria and GI distress and behavioral issues in children with ASD. One of the key findings is the stool samples from autistic children contained four organisms which were previously associated with ASD. The organisms are the Sarcina ventriculi, Barnesiella intestihominis, Clostridium bartlettii, and Clostridium bolteae. Another notable finding is the presence of the bacterium Haemophilus parainfluenzae in the stool of an autistic kid during a three-day period in which the child experienced diarrhea, GI pain, and several challenging behaviors, including self-injury. The results of the study were presented by the center’s microbial geneticist Ruth Ann Luna at the 2016 International Meeting for Autism Research (IMFAR).

Moreover, medical experts like Dr. Kenneth A. Bock have supported theories linking gut health, brain activity, and autism. In fact, he reiterated the importance of maintaining the balance of the metabolically-active microorganisms in the gut to avoid dramatic neurobehavioral effects on individuals, particularly in people with ASD. Dr. Bock also recommended a change in the diet of people with autism to ensure the complete digestion of the food they consume. He particularly cited gluten- and casein-rich foods as the diet that should be avoided as they are usually not completely digested in a large number of children with autism, as well as those with ADHD. He claimed that gluten and casein create endogenous opioids or brain-active compounds similar to morphine. These compounds may have major effects on brain activity, resulting in unresponsive and inappropriate behaviors in autistic individuals. To prevent these behaviors, Dr. Bock suggested the gluten-free, casein-free (GFCF) diet as a first phase of treatment for people with autism. He further advised the change in diet should be based on the condition of the individual.

Proper diet and maintaining gut health may be effective in controlling the symptoms of autism, as well as some GI issues in children with autism like IBS, which is a digestive disorder affecting the large intestine. Among the common symptoms of IBS are abdominal pain, cramping, constipation, diarrhea, and bloating. IBS is mainly triggered by the so called gastrocolic reflex, which informs the colon to become ready in digesting food. People with IBS often have their gastrocolic reflex activated too early, thus, creating muscle spasms and over activity that are painful.  To effectively prevent this condition, individuals with autism should consume easily digestible foods so as not to activate the gastrocolic reflex as much. These foods are also claimed to be effective as an autism treatment.

Foods That Should Be Avoided

Here are some foods that should be consumed in moderation or totally avoided by children and adults with ASD and IBS:

Insoluble fibers are fibers that are much tougher to digest than soluble fibers so it is recommended that they should be consumed in moderation as they are still needed in maintaining one’s health. Among the foods with insoluble fibers are green vegetables like spinach, lettuce, collards, and kale, foods containing whole wheat, wheat bran, and whole grains, fruits like pineapple, green beans, bell peppers, onions, broccoli, cauliflower, and tomatoes.

Fat is not recommended for people with IBS because it makes the digestive system work too hard. Individuals with IBS who eat fatty foods usually suffer from diarrhea or constipation. Among the fatty foods are fried foods, meat and dairy products, salad dressings, pastries, donuts, and croissants.

Carbonated products such as sodas should be avoided because they may cause bloating and cramps. Soda also contains lots of caffeine which should be off limits.

Coffee and alcohol should be avoided because they are known to be GI stimulants. Coffee, in particular, contains caffeine that stimulates the colon.

Artificial sweetening products like sorbitol are generally considered to be bad for individuals with autism and those with IBS. Ingredients used to provide texture and stability to certain products like carrageenan and guar gum are also known to cause GI symptoms. Among the products with these ingredients are dairy products like ice cream.

Since majority of children with ASD suffer from GI issues and some form of IBS, it is recommended that they should consume foods with soluble fibers to effectively reduce their symptoms or treat them completely. Here are some suggested foods for children with autism and GI disorders:

Benefits of Foods Rich in Probiotics for Kids with Autism

Probiotic-rich foods are important in ensuring good nutrient absorption, maintaining digestive health, and supporting the body’s immune system. Aside from these functions, there are other health benefits of probiotics to the human body. Here are some of them:

Disadvantages or Side Effects of Probiotics

Although probiotics can be considered as generally safe for consumption by health individuals, there may be short-term side effects of ingesting these live microorganisms. Among the alleged side effects are mild gas and bloating. Some brands of probiotics are claimed to cause overstimulation of the immune system. Other brands are also said to have an adverse effect to the body’s metabolic pathways like carbohydrate metabolism. Individuals who are immune-compromised, seriously ill, and suffering from certain bowel problems are advised to seek their doctors’ approval before consuming probiotics. The live microorganisms are also advised to be consumed with caution by infants, young children, and pregnant women.  It is also advised that probiotics should never be given to premature infants. Consumption of probiotics by some types of patients like those with blood in their stools, post-cardiac surgery patients, and patients with pancreatic dysfunction should also be authorized by their physicians.

It can be challenging sometimes for parents and carers of kids with autism to manage as the condition is very complex and there are multiple, interconnected symptoms. However, the various advancements in medical research resulting in the discovery of probiotics for autism, and improved knowledge on the functioning and purpose of the microbiome in the body, among others, are positive signs toward a complete and effective treatment. In the meantime, these new discoveries should be embraced to help children with ASD in managing the most common symptoms and in improving their quality of life.

About the Author: Autism Parenting Magazine

Autism Parenting Magazine is the leading magazine for parents of autistic children as well as professionals working with children on the spectrum. Our magazine features articles from hundreds of contributors including respected professionals, autism experts, parents of children on the spectrum, and adults with autism. Since 2012, our focus has been on objectively publishing autism-related topics, events, developments, treatments and news stories on autism to include health, safety, sleep, toilet training, sensory issues, stress, innovative products, and newly published books. We believe focusing on a person's strengths and interests will increase confidence and foster living the most independent and successful life possible. We know every child with autism is different, and as such, respond differently to a variety of approaches and techniques. All people should have the same opportunities presented to them with assistance as needed. Amy KD Tobik Editor-in-Chief Autism Parenting Magazine